How to Recognize Kratom Addiction (And Overcome It) 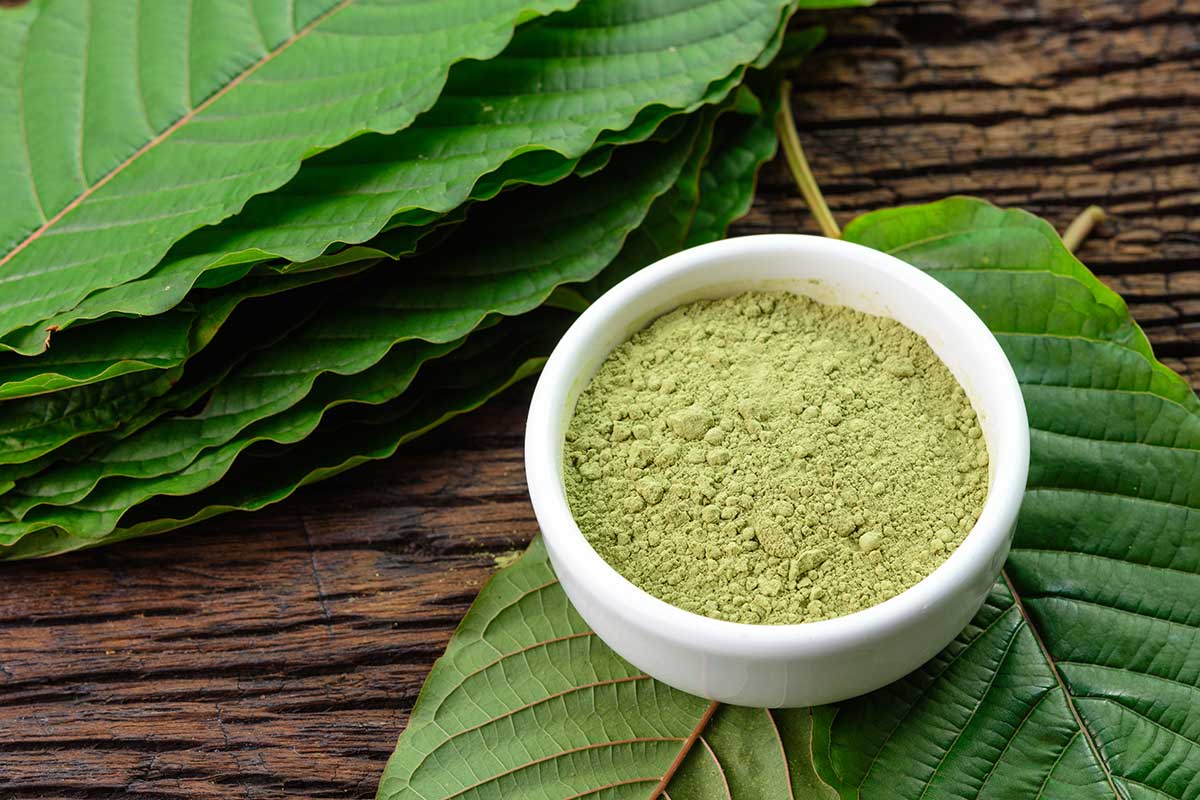 Fighting a Kratom addiction can be intimidating, and for some, it may feel impossible. Too often, people try to do a Kratom detox on their own; when they experience the initial stages of withdrawal, they fear that the entire process will be painful, and so they return to their old habits. The good news is that there’s a better, safer way to curb Kratom addiction.

At Atlanta Detox Center, our drug addiction treatment programs can help you or someone you care about to begin their recovery from Kratom addiction. We customize our treatment plans to fit the unique needs of each person in our care. Our team of therapists and addiction specialists has helped many people overcome their addiction issues, and we can help you too. Learn more about our programs by calling 833.631.0534 or completing our convenient online form.

The U.S. Food and Drug Administration issued a statement discouraging the use of Kratom, citing its potential for drug abuse.

Kratom leaves come from mitragyna speciosa, an evergreen tree native to Southeast Asia. There it has been used as a traditional medicine opiate substitute for more than a century. Some believe it is an effective drug to combat opioid addiction. Effects of kratom vary widely, as some experience an opioid-like effect, while others feel a stimulant effect. Recently, Kratom has become prevalent elsewhere, including in the United States, and is said to relieve physical pain as well as combat depression and anxiety. The Drug Enforcement Administration wanted to ban the sale of Kratom by categorizing it as a Schedule 1 drug but later decided to delay its decision. In the DEA’s 2017 Drugs of Abuse resource guide, kratom, DXM, and salvia are listed as “drugs of concern.” The United States Food and Drug Administration maintains a statement discouraging consumers from using kratom.

First is the Come-Down

(6 – 12 hours after last use). Because of Kratom’s ability to give a feeling of euphoria and relaxation, when a person comes down from their high, they’re often left with a feeling of anxiety or even depression. Fighting the urge to feel euphoric again is the first challenge to kicking an addiction. It’s a vicious cycle. In order to avoid the emotional discomfort of coming down, the person feels they must take more of the drug. Over time, they build up a tolerance and take it more often throughout the day to feel the same high. And so, the first step of withdrawal is understanding that a feeling of pleasure can be achieved without the drug and that the risk of overdose is not worth the quick fix.

Then Come the Initial Withdrawal Symptoms

(Days 2 – 3). Within roughly 12 hours of coming down, the person will begin to experience the initial withdrawal symptoms. The typical symptoms a person may experience are:

During this part of a Kratom detox, the person may also feel strong cravings to start using again to avoid the overall discomfort. Kratom withdrawal symptoms can include nausea, vomiting, and diarrhea, resulting in an electrolyte deficiency.

The Peak Symptoms Come Next

(Days 3 – 5). The most challenging part of the withdrawal process is the peak symptoms, which can last anywhere from a few days up to a week. Here, the most common symptoms are nausea and stomach pains, which will typically cause vomiting and diarrhea. During this part of a Kratom detox, it’s crucial to have medical assistance to alleviate the pain. It’s also strongly recommended to be surrounded by a community to help stay focused on progress and avoid relapsing.

Then There Will Be Light at the End of the Tunnel

(Around day 6 or 7). The peak symptoms will start to disappear after a few days, though some milder symptoms can remain. Depending on various factors such as frequency of use and each person’s unique body chemistry, these lesser symptoms can last for another week or even two weeks. In general, the less intense the peak symptoms, the less time, the milder symptoms will stick around, according to The Journal of Opioid Management.

(After 7 – 10 days). While the acute symptoms of a Kratom detox can be dealt with and will subside relatively quickly, some less intense ones can stick around for months and some for years. Some of the symptoms that may stick around longer are:

These longer-term symptoms are why it’s crucial to seek medical help. Having professional support to manage these continuous withdrawal symptoms will help avoid a relapse.

Important Note: Once someone has come this far through the Kratom detox process, they’ll have lost some of the tolerance they had built up for the drug. As a result, when individuals return to the drug to combat their symptoms, overdoses often occur. Their body simply cannot handle the dosages that it previously could. This is why it’s important to have professional help to avoid returning to use.

Why Detoxing on Your Own Could Be Dangerous

When people attempt a drug detox on their own, they could be at risk of:

The discomfort of kratom withdrawal could put you at risk of relapsing. One of the benefits of medically assisted Kratom detox is that your pain and discomfort will be managed by professional staff.

What Is Kratom Detox?

The good news is that there is a safe way to recover and avoid relapses moving forward. A Kratom detox program backed by medical treatment, in a safe environment, supported by a caring community can help you get your life back on track. And with aftercare programs designed to mend relationships, rebuild finances, and feel whole again, it is possible to build a bright future. A full recovery is possible; it’s never too soon to start a Kratom detox program.

At Atlanta Detox Center, the kratom detox program is designed to keep patients comfortable and cared for throughout the entire process. Here’s what to expect:

Step 1 — The patient gets a psychological and physical assessment, gets their lab work done, and receives a personalized treatment plan. The patient is then shown to their room with a comfy Tempurpedic bed, flatscreen television, and plenty of meals and snacks available—everything to make sure they’re as comfortable as possible.

Step 2 — Our certified professionals administer the patient medical treatment to alleviate their withdrawal symptoms. The medication helps to reduce the typical stresses and pains that come with a Kratom detox, which also helps curb their urge to use again. The patient will have 24/7 access to staff who will regularly monitor and provide medication as needed.

Step 3 — Upon completing the initial Kratom detox, the patient is guided through a therapy program to help ensure ongoing recovery. Depending on the patient’s unique needs, they might be given one or a combination of therapies. Some examples are:

Combined with the aftercare program, the Kratom detox is all about setting the patient up for long-term recovery.

What Are The Benefits Of Kratom Detox?

A few of the benefits of kratom detox include:

3 Things to Look For In a Kratom Detox Program

Three of the biggest challenges to recovery are:

It all comes down to confidence and comfort. If the person doesn’t feel confident they can actually recover, they’re not likely to try to beat their addiction. And if they do try, if the person is feeling discomfort—either from the aches and pains of the withdrawal or the perceived shame and guilt from their peers—they’re setting themselves up for failure. When choosing a Kratom detox program, here are the three important things to look for:

Withdrawal can be uncomfortable and, in some cases, dangerous. And while nobody should self-administer a medical detox, they also shouldn’t attempt beating the painful withdrawal stages without medical assistance. A successful Kratom detox program should be supervised by dedicated professionals at every step, monitoring vital signs, administering medication as needed, and guiding you through the first steps to recovery.

Nobody wants to be surrounded by people who are constantly trying to “fix” them. You want to be around people who are just like you, who understand you and what you’re going through. One of the keys to a successful recovery is being part of a community of people who’ve been in your shoes and come out clean on the other side. These people can show you the exact steps you need to take to get back on track (and stay there).

The problem with one-size-fits-all detox programs is that each person is unique. People have different backgrounds, emotional hurdles, and financial situations. They also have different tolerances, triggers, and physical and psychological needs. According to The National Alliance on Mental Illness, roughly half of all people struggling with addiction also have unique mental circumstances that can affect the treatment methods and the duration they need for recovery. When choosing a Kratom detox program, you should look for one that takes the time to assess your personal circumstances. Make sure the program asks about and takes into consideration the substances you’ve been using, the dosage and duration of use, and your full medical history, and uses that information to create a personal plan designed only for you.

With these three things, you can feel confident that your personal Kratom detox program will get you where you’re going. And you’ll know that you will get there comfortably with the proper medical treatment and with the support of people who genuinely care about you.

How to Know When Someone Needs Help With Kratom Addiction

Kratom addiction is more prevalent than you may think. It’s estimated that roughly 5 million Americans use Kratom. If you’re not sure if you or a loved one is struggling with Kratom addiction (or other opioids), here are some possible warning signs to consider:

If any of these potential warning signs apply to you, there’s a strong chance that you or the person in question are either addicted or on the verge of addiction.

It’s never too late to receive addiction treatment. If you or someone you care about struggles with Kratom addiction, a full recovery is possible. At Atlanta Detox Center, a Kratom detox program backed by a caring community and medical assistance will help ensure there are no relapses. At Atlanta Detox Center, we can also help you detox from alcohol, heroin, prescription drugs, and more. Learn more from our team by calling 833.631.0534 or completing our online form today.